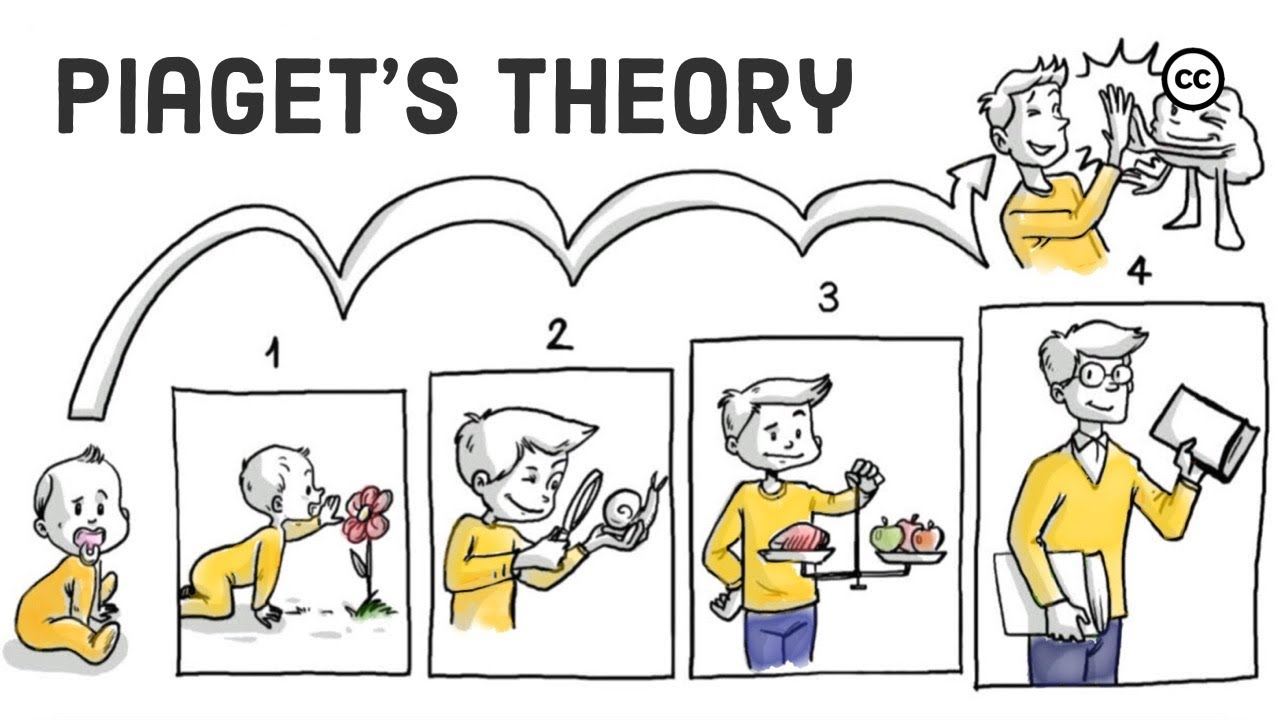 There are several different approaches to explain the theoretical aspects of child development. Jean Piaget was one of the key theoretical psychologists who postulated a renowned theory on cognitive development. Piaget’s Cognitive Development theory divulges details surrounding the mental development and growth of children between birth and adolescence. Within Piaget’s cognitive development model, there are four key stages described. Within these stages, key milestones are to be reached and completed in order for the child to reach healthy development.

Piaget’s cognitive development theory was focused on how children interact with the world to construct their knowledge. This particular theory suggests that children learn from experiences, rather than instructions. Because of this, Piaget used the analogy of children as ‘Little Scientists.’ Experiments are performed by children to determine outcomes and learn from their experiences. Whereas other theories suggest that children are dependent and require guidance, Piaget’s cognitive development theory favours independence and exploration.

Within Piaget’s cognitive development model, four key stages are outlined from birth to adolescence. It is considered that all children experience every stage, however, this may occur at different rates. It is suggested that the current stage must be completed before the child can move onto the criteria of the next stage. Whilst there are ages associated with each stage, these are not indicative of a set timescale for every child.

· Stage One: The Sensorimotor stage (Age: Birth to 2 years)

Within this stage, Piaget believed that infants use their senses to discover and explore the world around them. They don’t yet have an understanding of the world or themselves. One of the key milestones within this stage is object permanence.

Object Permanence is a key skill developed within the sensorimotor stage which represents a child’s knowledge that an object exists, even when not in their sight. Whilst very young, a child may interact with a toy with the knowledge that the object exists, if they can see the toy, they will reach for it. However, without object permanence, studies have demonstrated that when the toy is placed out of sight, they will have no knowledge of its existence. They will only look for the object in the last place they saw it, rather than where the object has actually been moved to.

Once the skill has been developed, you can check for object permanence by handing the child a toy, hiding it, and assessing their skills to search for the toy. If this task is successfully completed, it means the child has a mental representation of the object and can retain that it exists outside of their vision.

The majority of this stage is focused on how children’s thinking evolves with their understanding of the world. Piaget believed that at this stage of development, children are egocentric. This cognitive development theory suggests that children have difficulty understanding the world from another person’s perspective, so it is difficult for them to consider the feelings of others.

At this time Piaget suggested that children do not yet possess symbolic thinking and cannot make sense of abstract concepts. This means they struggle to understand symbolism and metaphors due to their lack of imagination. Piaget used language as a way to study this theory and focused on how preoperational children will respond to figurative language such as rhyming.

At the end of this stage, children should start to transform their thinking from egocentric to having a sense of reality and logical thinking.

Piaget’s third stage of cognitive development sees advances in logical thinking and problem-solving skills. Children between 7-11 years old are now capable of performing thought experiments through mental imagery. Piaget used the example of conservation. This concept can be demonstrated with two different-sized containers holding the same amount of liquid. One container would likely be long and thin, whereas the other would have a wide base. Children would be shown the same amount of water being poured into each container and then asked whether one held more liquid or if they had the same amount. According to Piaget’s theory, if a child indicated a container had more liquid, they are considered to still be in the pre-operational stage. A child that could identify that they had the same amount of water is demonstrating conservation. This is one of the key milestones within the concrete operational stage.

Within the concrete operational stage, a child’s cognitive development starts to become more mature, they have less egocentric thinking and start to understand how the world works. They are able to understand the reasons behind cause and effect, classify objects into groups, and can predict how an object will behave in different conditions.

The final Piagetian stage is the formal operational stage which describes the ability to think abstractly about hypothetical situations. Children within this stage can solve problems systematically. Piaget believed that at the end of the formal operational age, a child would be able to do things such as think creatively about their own ways of solving problems and could realistically understand another person’s perspective.

An understanding of Piaget’s theory of Cognitive Development can be valuable for parents. Whilst there are theories that refute or disagree with certain components of the four-stage model, there are some key theoretical assumptions that can assist your parenting for healthy child development.

One of the key takeaways for parents from Piaget’s cognitive development theory is that each child develops at a different rate. This helps parents to understand that although their child’s siblings, classmates, or family members could be developing at a faster rate, this doesn’t mean there is anything wrong with their child’s cognitive development. When parents witness similar age children developing understandings more advanced than their own child, they may feel as though they have failed to teach their child or try to pressure their child into developing certain skills. Piaget’s theory allows parents to understand that children will develop different skills at different stages. This will help them to influence their child to maximize their development as it occurs.

Another point that was important to the basis of Piaget’s Cognitive Development theory was that children are independent little scientists that should discover the world by themselves. There are refuting theories that suggest children require scaffolding and support. However, a fusion of these two approaches often provides the most proactive approach to encouraging healthy child development. Providing the opportunity for self-dependency gives your child the opportunity to understand that they are capable of completing seemingly difficult tasks themselves.

Piaget’s theory of Cognitive Development outlines four stages in which a child’s rational and logical thinking develops over time.  Piaget is considered one of the most influential thinkers on early cognitive development. Piaget believed that children are “little scientists” who are eager to learn new things about the world around them, parents can assist their child’s development by providing safe environments for exploration.

Whilst this theory is well respected and implemented in many parenting practices, a parent knows their child the best. Piaget’s understanding can be useful in certain circumstances; however, a wide knowledge of child development theory will give you the best opportunity for encouraging healthy development in your child.